ANMM research associate Jeffrey Mellefont leads a voyage on board a traditional Indonesian sailing ship, to view a total eclipse of the sun in the Moluccas – the historic spice islands.

IN MARCH THIS YEAR A TOTAL ECLIPSE of the sun tracked across the Indonesian archipelago, from Sumatra in the west to the remote, eastern group of islands called the Moluccas. It was some 300 years since a total solar eclipse had taken the same track through these historic islands of spice.

At the time of that previous eclipse, the Moluccas were dominated by the United Dutch East India Company. This corporation of armed Dutch merchants had imposed a ruthless monopoly over two of the world’s most lucrative trade commodities, the spices clove and nutmeg. They grew nowhere else in the world but on a few remote Moluccan islands. Prized by the elites of Europe, the Middle East and Asia for their rarity and exclusiveness, it was these costly Moluccan spices that spurred the European age of discovery as the Portuguese, Spanish, Dutch and English competed to find their mysterious source, and then to control their trade.

In today’s post-colonial world, the cloves and nutmeg that were once worth their weight in gold don’t count for all that much. The Moluccas are once again a backwater, remote and little-visited even as international tourism to Indonesia increases. Their unspoiled beauty and fascinating cultural and historical heritage are outstanding, though, and the best – indeed the only – way to explore them is by boat. One of very few vessels specializing in maritime tourism to the Moluccas is Ombak Putih (‘White Wave’), a luxurious sailing ship based on traditional Indonesian sail-trading craft. The voyages teach visitors about the cultures and history of these exotic islands, including past maritime links with Australia. That’s the role of on-board guest lecturers such as me. In March this year, we added the unique opportunity to view a total eclipse of the sun.

There’s a solar eclipse somewhere on the planet every 18 months or so, when the earth, moon and sun are lined up in a row (see diagram above). If the moon is also at its closest to the earth (sometimes called a ‘super moon’), it appears big enough to completely obscure the sun, causing a total eclipse. If the moon’s more distant and appears smaller than the sun, leaving the sun’s outer circumference visible, it’s known as an annular eclipse.

A total eclipse can only be seen in the dense shadow zone called the umbra. During the total solar eclipse of 9 March 2016 the umbra, only about 150 kilometres wide, sped along a track through Indonesia and out into the Pacific Ocean, as the moon performed its cosmic dance over the face of the sun. The more diffuse moon-shadow or penumbra fell as far south as Darwin, where people saw a partial eclipse.

On Ombak Putih we were able to place ourselves in the best position to view the eclipse, in one of Indonesia’s most breathtaking seascapes. This was where four perfect, conical, still-active volcanoes rise from the sea in a spectacular line, just a few nautical miles north of the equator. It was on the fertile slopes of these four volcanic islands – Ternate, Tidore, Moti and Makian– that clove trees had evolved. Sultans built their palaces and mosques on them, and colonial powers built forts and foughtwars to control the spice trade.

Our voyage had begun in Ternate, which was gripped by eclipse fever. Its hotels were full and a festival of Moluccan music and dance, hosted by its traditional sultan, was in full swing. Yet when we sailed into our eclipse-viewing position, two days later and 30 nautical miles south, we were the only boat in sight. My chosen spot between the islands Moti and Makian was right on the centreline of the eclipse track, to maximise our experience. For us the eclipse lasted two hours 45 minutes from first to last contact of the moon with the sun. Its climax was three minutes 20 seconds of total eclipse when the moon entirely obscured the sun, and day turned to night.

This dramatic event has often terrified humankind. Ancient Indian texts blamed it on a demon called Rahu who drank divine nectar to become immortal. The goddess Mohini cut off his head before he could swallow it, but the magic potion in his mouth made Rahu’s head immortal. From time to time it swallows the sun, causing eclipses. Luckily, the sun soon escapes back into the sky through the severed gullet, ending the eclipse. Related legends explaining eclipses are found in Indonesia where Indian religious traditions took root over a thousand years ago, carried by seaborne traders involved in the ancient spice trade.

Predicting such a frightening event was useful for rulers. Clay tablets show that ancient Babylonians recorded eclipses – the first was on 3 May 1375 BC – and could also predict them, identifying the recurring, precise celestial cycles by which these events occur. Chinese legend speaks of two court astrologers called Hsi and Ho who were executed for being too drunk to predict a solar eclipse for Emperor Chung K’ang (2159–1948 BC). Modern astronomers can deduce this was the eclipse of 22 October 2134 BC, which thus becomes the earliest one mentioned in human annals.

The Greek astronomer Hipparchus (c 120–190 BC) used a solar eclipse to calculate the distance from the earth to the moon – and was only 11 per cent out. An eclipse was used to validate a critical prediction of Albert Einstein’s 1916 theory of general relativity. In 1919 the British astronomer Sir Arthur Eddington showed that gravity bends light, by photographing stars that came out next to the eclipsed sun. The stars weren’t quite where they were supposed to be, as their light was deflected by the sun’s gravity. 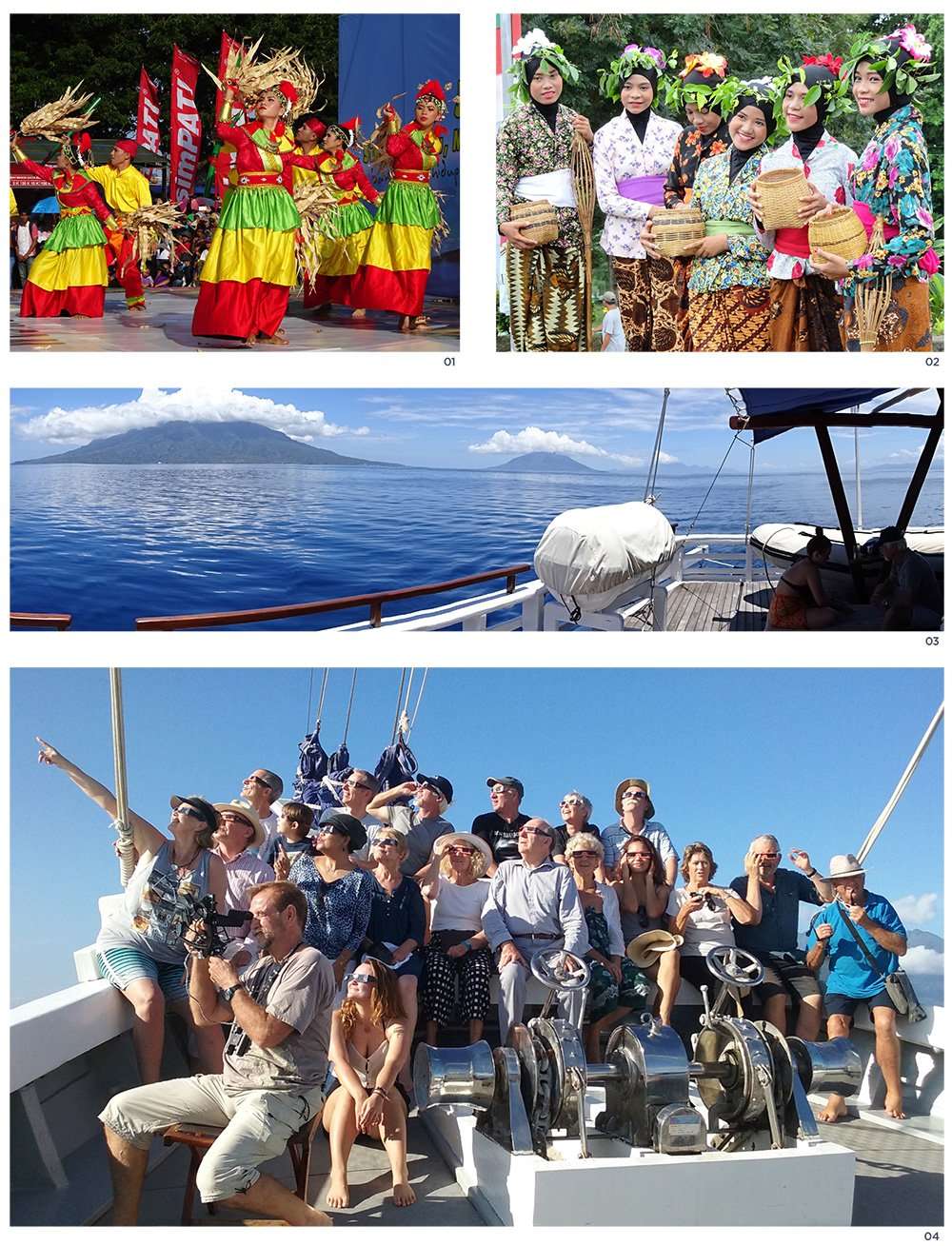 01 Dancers at Ternate’s cultural festival to celebrate the eclipse.
02 On Banda Neira Island, dancers celebrate the nutmeg harvest.
03 Volcanic islands where cloves first grew: Makian and Moti, with Tidore and Ternate in the distance.
04 Guests on Ombak Putih don eclipse glasses as the spectacle begins at 8.30 am local time. All photographs Jeffrey Mellefont (front, left, with sextant)

Looking at a partially eclipsed sun can permanently damage one’s retina. On Ombak Putih I handed out eclipse-viewing spectacles sourced from a Sydney astronomy shop. We also used reversed binoculars to project an enlarged image of the eclipsing sun onto the deck. But for the best view of all, I brought along the old sextant that I had used for navigation, during an earlier, pre-GPS seafaring career. Sextants use solar filters and magnifying optics to let you look directly at the sun (or the moon, stars and planets) in order to measure their height above the horizon. That, plus an accurate chronometer to give the exact time of the sighting, books of tables and a page of pencilled sums, gave your position at sea before GPS satellites were launched in the 1980s.

On Ombak Putih, as the invisible moon slowly took an ever-bigger bite out of the disk of the sun, there was time to show everyone on board how to sight the eclipsing sun through the sextant – giving everyone a hands-on experience they shared with navigators like James Cook.

Then, dramatically at about 10 am, the dark shadow of the umbra swept over our part of the Moluccas. The hot tropical day suddenly got cooler and it went so dark that you couldn’t read your wristwatch. Above us, the sun was completely covered by the moon, a stark black disk surrounded by a ghostly halo – the sun’s corona, a lovely, luminous plasma of charged particles. But perhaps most memorable of all, right around 360 degrees of the horizon, was a beautiful, pre-dawn flush of colour, silhouetting those spectacular volcanic islands of cloves rising out of the Moluccan Sea.

It got even better, in fact, as the moon began to move out of alignment with the sun. We glimpsed ‘Baily’s beads’, little gems of light visible for just a few moments as the sun’s rays seeped through valleys on the moon’s periphery. They’re named for the English astronomer Francis Baily, who first described them in 1836. And then we saw the ‘diamond ring’ effect when the first jewel of light flares up from the re-emerging sun. Everyone cheered.

‘A Bach fugue in the sky,’ says science writer Timothy Ferris. ‘The heavens declare the glory of God,’ says Joseph Hayden in his mighty choral work The Creation. All I can say is, how extraordinary to live in a solar system where our one and only moon fits so perfectly over the sun.

To top off a flawless morning, we motored south when the eclipse was over and sailed over the equator. Here we stopped again for a line-crossing ceremony, performed by our Indonesian crew dressed as shaman–priests. They anointed us with holy water before we all jumped into the equatorial Moluccan Sea.

Author and ANMM research associate Jeffrey Mellefont is lecturer and guide on selected voyages of the specialist Indonesian maritime tourism operator SeaTrek. Museum Members will receive a 10% discount on Jeffrey’s next voyages: Bali–Kangean Islands–Madura–Bali 16–23 November 2016 and Moluccas to Sulawesi 11–22 January 2017. Full itineraries at seatrekbali.com, or contact the Members office.