The Spice Islands are wrapped in an aromatic history of cloves, mace and nutmeg, Kings and Sultans, spice wars, and the rise and fall of invading armies.

As I travelled through the Spice Island chain, I saw massive groves of cloves and nutmegs clinging to the perfect cone-shaped volcanic islands dotted across the Maluku Sea. In the 8th century, Chinese merchant ships sailed through the Moluccas (Maluku), and the Arabs followed later. The spice wars involved the Portuguese, the Dutch and the British, who fought over the lucrative trade of exotic spices.

We are reminded of this spice trade on the 1,000 rupiah note, which proudly displays Tidore Island next to Ternate, one of the famed Spice Islands. It is here that I visited my first Portuguese fort. 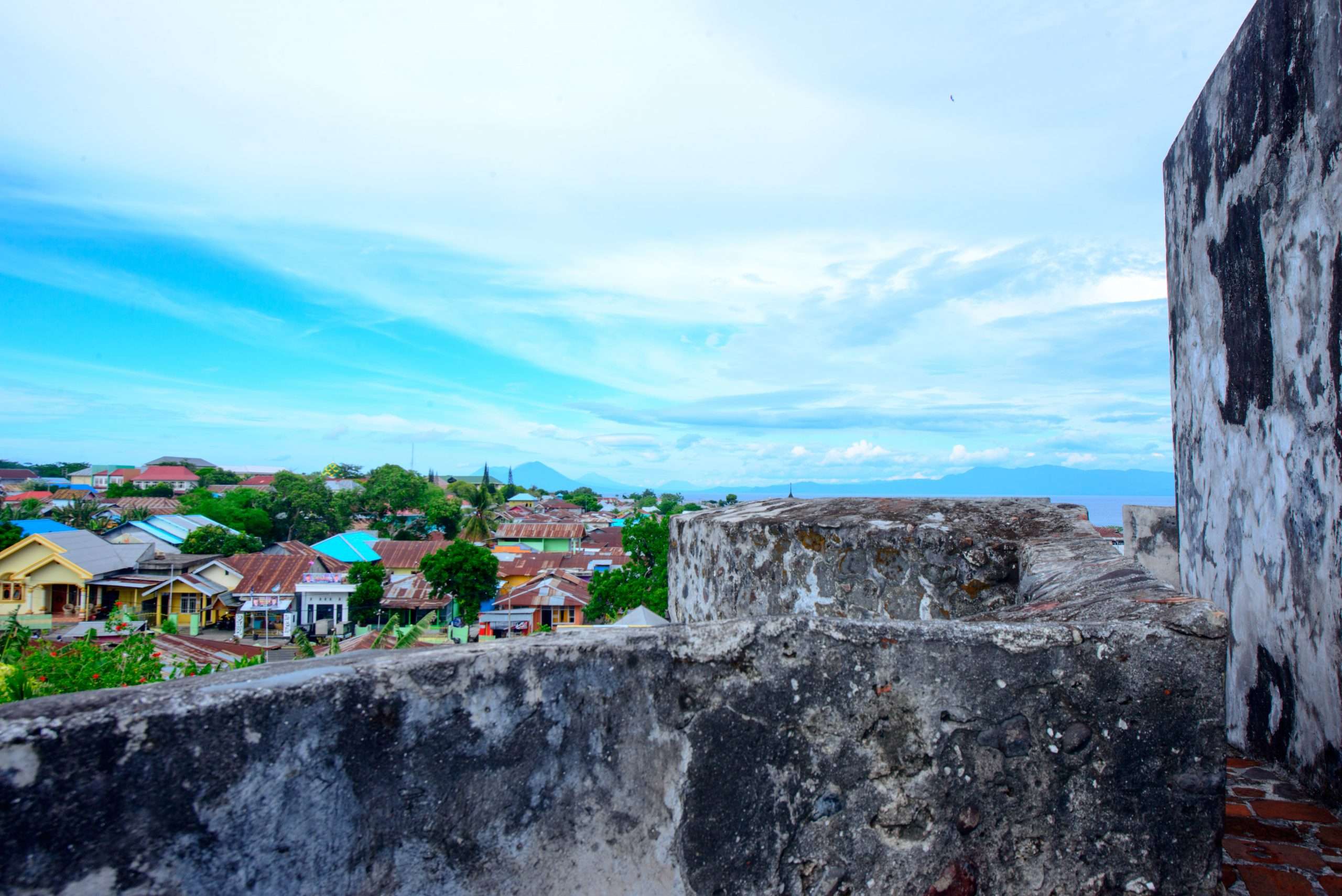 I leant against the old stone wall of Fort Tolukko, Ternate, soaking in the history. This beautifully preserved 16th century Portuguese fort is protected by an impressive 10-metre tall solid stone wall. Fort Tolukko is located in the village of Duga Duga overlooking the Maluku Sea. It was built by the Portuguese to protect the clove industry of the island, which at this time was the only place in the world where cloves grew. Later, seedlings were smuggled out and found their way to Africa and other places, where clove plantations were established.

I was impressed by the two dominant bulwarks that stood at the front of the fort, which is typical of Portuguese fortress architecture. I found my visit to this fort was more of a reflective activity. Listening to some beguiling tales told by my guide allowed me to fall into the history of these islands and set the tone for what was to come next.

My next stop was a visit to Alfred Russel Wallace’s house where the famous “Letter from Ternate” was written in 1858. Alfred Wallace was a naturalist and zigzagged his way across the Indonesian archipelago collecting over 3,000 bird skins, including the famed bird of paradise, 20,000 beetles and butterflies and land shells.

His travels took him from Borneo, Sulawesi, Sumatra, and Java all the way to New Guinea. He made between 60 and 70 separate journeys to the islands strewn across the vast archipelago, often visiting the same island two or three times to do more collecting during different seasons.

Documenting the natural history of the region, he eventually wrote his theory of evolution to Charles Darwin, whom he admired as a leading naturalist and geologist. The Darwinian Theory of natural selection becomes rather contentious, as it is hinted by many a scholar that it was actually Alfred Wallace’s letter from Ternate and his exhaustive research that cracked the code, so to speak, on the ‘species question’.

Darwin had been working for 20 years on the question of how animal species came to be different. When Wallace’s letter arrived from Ternate (which took three months to get to England), it seems he had summed up in a mere 4,000 words the key elements of the theory of evolution. Darwin had been researching volumes of material and had not made any public statements except to eminent scientific friends, off the record, about his theories. As Darwin approached his 50th birthday, he was still to publish his magnum opus and was a semi-recluse living in a household with 15 servants and a wealthy wife, who had family money from the Wedgwood Empire.

In comparison, Wallace was a lone wanderer and not university educated. He was a field naturalist and a very shy person, whereas Darwin was in a stronger position as he had completed many years of meticulous work. When Darwin presented his work to the Linnean Society, a society dedicated to natural history, it was largely Wallace’s content. He presented three documents: two letters of his own ideas on evolution written to his friends in 1842 and again in 1844 and a further paper which married the contents of Wallace’s letter from Ternate with his own ideas. This was presented without Wallace’s permission or mention of his name.

After this was favourably received, Darwin rushed to print and gave the manuscript the name On the Origin of Species by Means of Natural Selection. The book was a huge success. Thirteen years and six editions later, this book did not acknowledge the work of Wallace. Darwin’s name was on the book and his theory of evolution by natural selection, or “survival of the fittest” became the most profound scientific development of the modern age.

Luckily for Darwin, when Wallace finally left Indonesia and came home, the humble Alfred Russel Wallace was largely concerned with cataloguing his beloved insects and bird skins, which had been shipped home in the thousands, and proceeded to work on his own book.

It is in Wallace’s book The Malay Archipelago that the true genius of Wallace is revealed. Since its publication in 1869, the book has never been out of print. Wallace was an extraordinary man who lived in Ternate from 1858 to 1861, and as I stood at the back door of his humble house, I felt the dedication of this man’s work. He contributed so much to natural history and the discovery of the origin of man.

The name Maluku is thought to have been derived from the Arab trader’s term for the region, Jazirat al-Muluk or ‘the island of the kings’. What the Arab traders brought back to their home ports were exotic spices: cloves, mace, and nutmeg. These were sold to Venetian merchants and became known in Europe as “the nuts from Muscat”. Because of the high value of these spices in Europe and the large profits they generated, many adventurers followed in the footsteps of the Chinese and the Arabs; first the Portuguese and later the Dutch followed by the British.

The Birds of Paradise

The ecology of the Maluku Islands has fascinated naturalists for centuries. Alfred Russel Wallace’s book, The Malay Archipelago, was the first significant study of the area’s natural history and remains an important resource for studying Indonesian biodiversity. 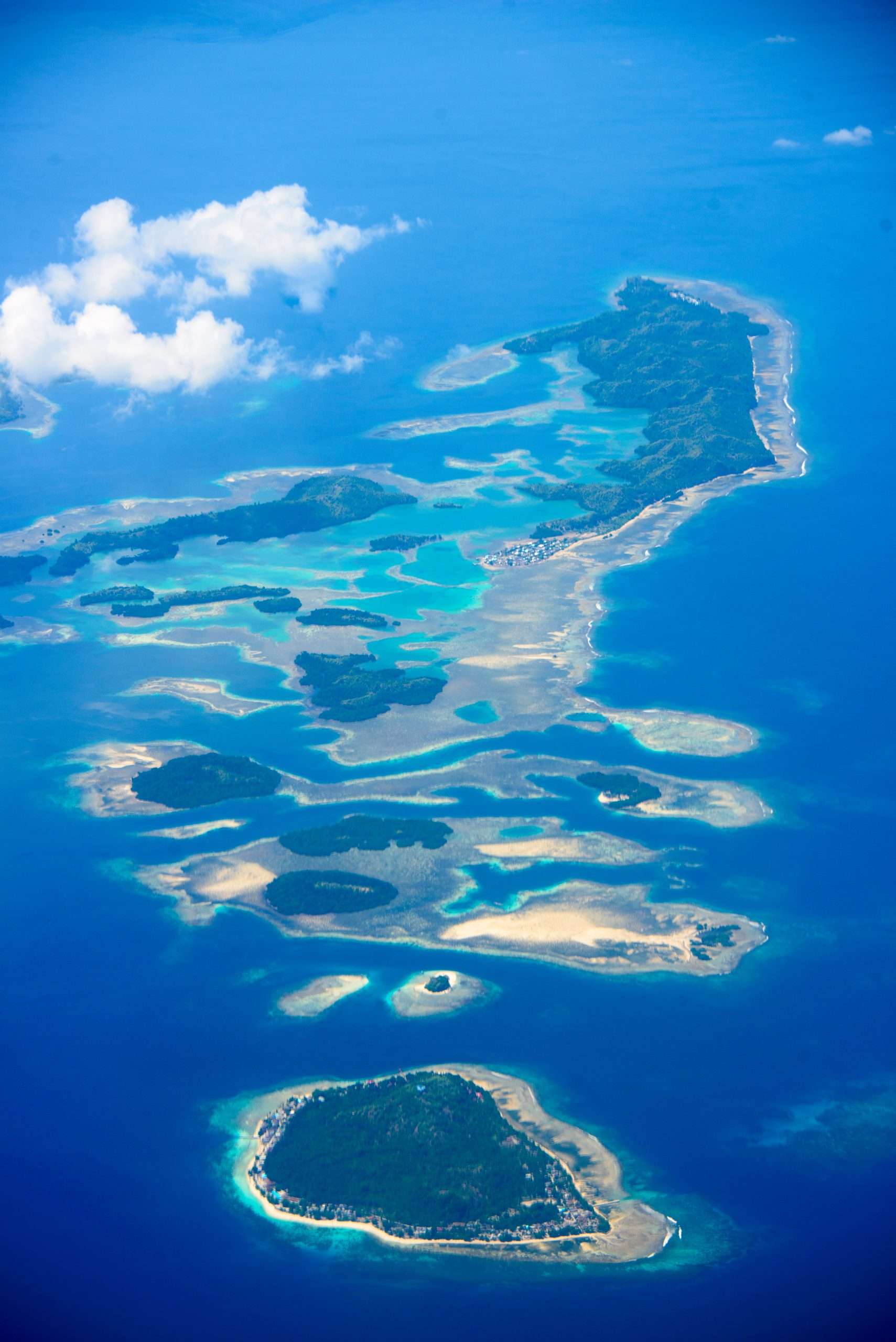 The Spice Islands Voyage: In Search of Wallace by Tim Severin. 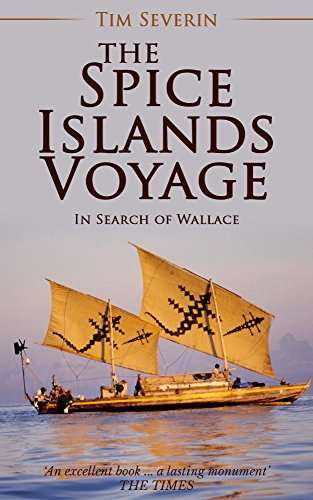 Maluku Islands
The Maluku Islands formed a single province since Indonesian independence until 1999, when it was split into two provinces. A new province, North Maluku, incorporates the area between Morotai and Sula, with the arc of islands from Buru and Seram to Wetar remaining within the existing Maluku Province.

How to get there: Regular flights from Jakarta and major Indonesian cities service Ambon and Ternate.

Where to Stay: SeaTrek sailing adventures offer 7- and 10-day cruises on traditional phinisi schooners around the Spice Islands from Ternate and Ambon. This is a comfortable way to see the famed islands and invited guest lecturers present fascinating evening talks onboard. www.seatrekbali.com

An umbrella (for shade protection), sunscreen, mosquito repellent, hat, walking shoes, swimmers and swim shirt for the many hours you will spend in the water snorkelling around the beautiful island stopping off at remote beaches.