WHEN YOU SEE THE SOUTHERN CROSS FOR THE FIRST TIME?

The sailing ship swayed in the light surge, the two tall white masts carving circles in the night sky far over my head. I lay on beanbag chairs on the aft deck, awaiting moonrise off one of Indonesia’s magical 18,000 islands. The surrounding waters were bathtub warm, the evening breezes soothing on my lightly sunburned skin. We have moored off Komodo, where the last of the world’s living dinosaurs live.

In the waning light of early evening, I had the aft upper deck all to myself. The other passengers were below, having dinner and drinks. However, I didn’t want to miss the light show. Instead, I lay quietly under the blackening night sky. I had maybe an hour. All around me, drying laundry hung tightly pegged to the lines, lightly flapping in the evening breeze. Fish splashed nearby. The lines hummed and sang when the wind came up.

The previous night’s stunning tropical full moon had obliterated the entire light play of stars. I’d been awake at 3 am, sleeping up top, feeling the spume and the rocking of the boat as we moved to a new location. The moon left a Rhine River of liquid silver in our wake. I was dying to see the sky without her. She would rise, bright orange like a Halloween pumpkin, over the dark hulking silhouette of the island, and grow increasingly brighter as the night wore on. 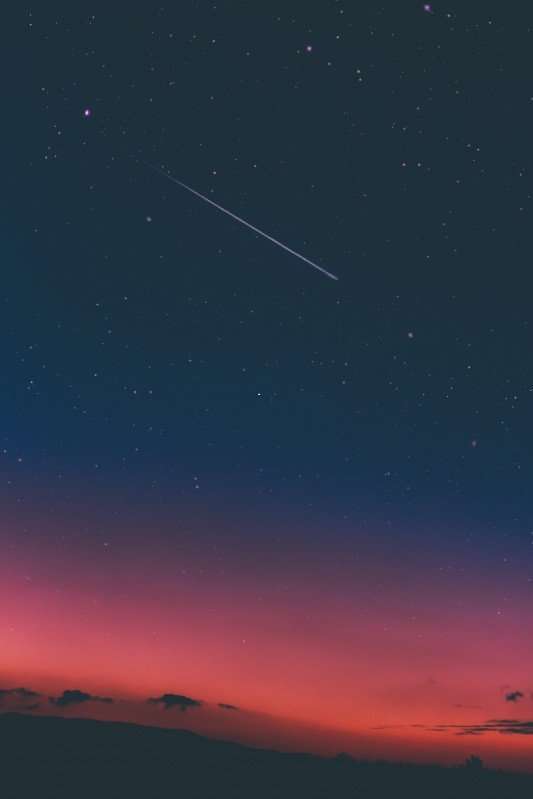 When I was very young, I lived in a part of Central Florida that was mostly citrus groves. Our small farm was snugged between oranges and an Angus farm, with a lake to the east. I used to lie on our dock on summer evenings after thunderstorms to watch the stars come out. From that dock, we watched all the launches from Cape Kennedy that streaked towards the very night sky I studied. The stars, the moon, the nebulas.

Get far out into the desert. High into the mountains. Far out onto the ocean. Deep into the wilderness, where trees far taller than the rising mast reach for infinity, and there is your sky. Here, thanks to Sea Trek, I was reacquainting myself with my old friend.

Lying on the breast of this gentle ocean, not a city in sight, I waited for the night sky’s magical players to appear.

And boy did they. 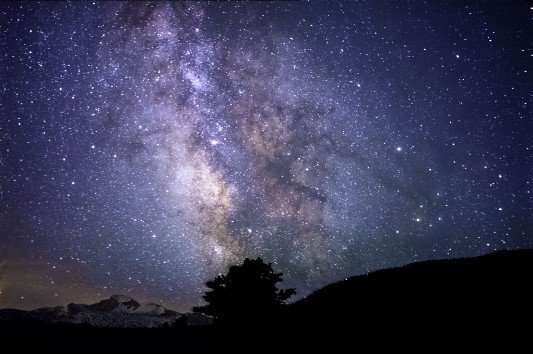 The Katharina, one of two superbly-appointed sailing ships in the SeaTrekBali fleet (SeaTrekBali.com), provided berths for twelve passengers, a full crew, and a kitchen that produced a prodigious amount of gorgeous food. I could hear the voices of two young men from Montana waft up from belowdecks, laughter from the day’s adventures. Part of me wanted to be with them, but this was my night to get lost in the beauty of the southern hemisphere sky.

As the last of the sun’s glow disappeared below the earth’s contour, the stars winked into view. Orion, my favorite and most easily-recognizable constellation, appeared at an odd angle. That’s what happens when you head south of the equator. Suddenly all manner of new constellations appear, and old ones in different places. This is how the ancient mariners, the early Polynesians, all the early seafaring folk reached their destinations: by the maps in the firmament. I did get lost, like a little kid, all over again. 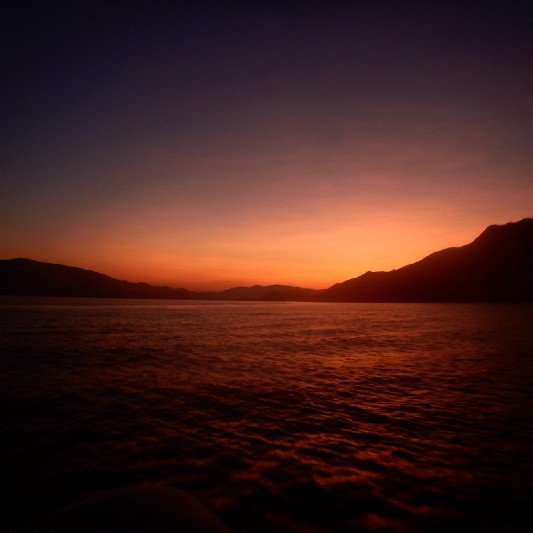 I sucked in my breath and held it as the last of the light disappeared and the night sky was fully revealed. All I could hear was the gentle lapping of water against the side of the ship and the clothing catching the breeze.

My eyes were opened so wide to take it all in that they began to dry out, so I had to blink. I didn’t want to miss a falling star, and I wasn’t disappointed. Right overhead, a real scorcher. Actually, the last of a meteorite, most likely, a bit of space dust. That special stuff of which we’re all made said Carl Sagan, and I wholeheartedly agree. I was watching pure magic. 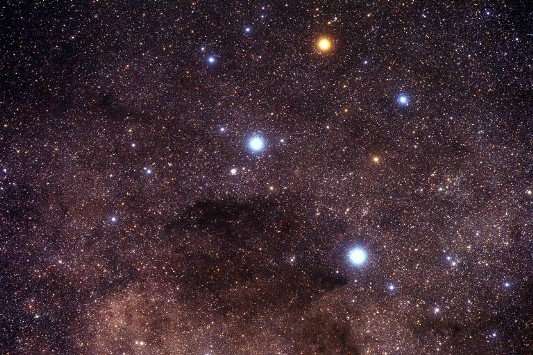 I lay as still as possible taking in the sky, for there was no promise that the next night would be so clear. After a while, I realized that the beginning of the moonrise was coming, and I leaped to my feet and rushed down the ladder.

I grabbed my new friend Lyman, from Montana, and dragged him above decks.

“Have you ever seen the Southern Cross?”

“There.” I pointed. Four clear, perfect points, the Southern Cross hung in the night sky like a beacon.

“Remember that song by Crosby, Stills, and Nash?”

“Never mind. Just remember this moment. This is the very first time you’ve seen her. You’ll never forget it.”

We stood for a while, star gazing until he recognized Orion. He was as delighted as I was. A mountain man, a hiker, he knew his night stars.

We grinned at each other. Then Lyman rejoined the larger group while I scrambled back to the upper deck. 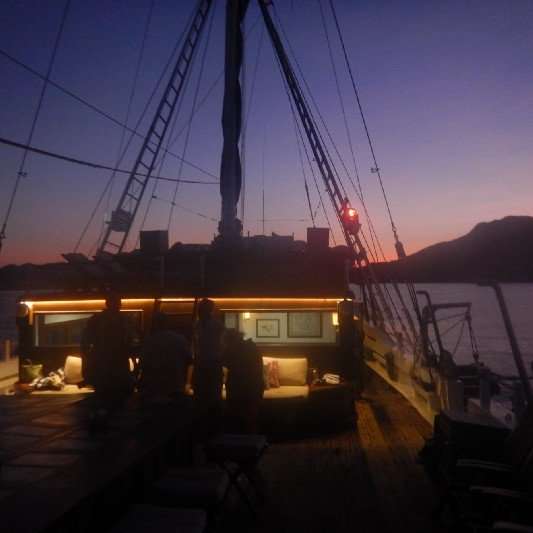 The still almost-full moon rose over the islands, slowly but surely overwhelming the magical carpet of luminous points overhead. I fell asleep to the gentle rocking, barely a sheet covering me in the warm tropical night. Up top, you’re left to your own devices, so any time you wake up you are treated to the night sky in all its glory. When I woke the next morning, the moon was orange again, just as it disappeared below the waves.

The next night we had clouds. Another perfect tropical day ahead.

Lyman won’t forget. In the fullness of time, there are certain moments that stand out for us. 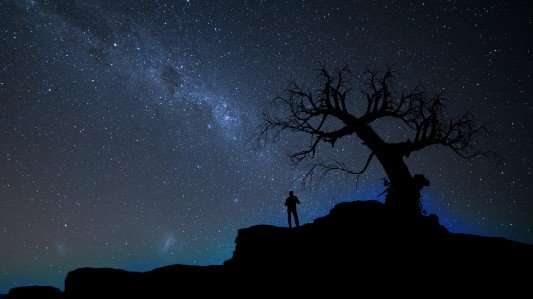 The Song that Sings Within Us

The song Southern Cross has an interesting history.

“Southern Cross” is based on the song “Seven League Boots” by Rick and Michael Curtis. Stills explained, “The Curtis Brothers brought a wonderful song called ‘Seven League Boots,’ but it drifted around too much. I rewrote a new set of words and added a different chorus, a story about a long boat trip I took after my divorce. It’s about using the power of the universe to heal your wounds. Once again, I was given somebody’s gem and cut and polished it.” Wikipedia

We need the night sky, and time away, not only to heal wounds but also to remember what’s truly important. No diamond, no gem is so gorgeous as the unspoiled night sky. Few experiences so lovely as enough time away, far enough away to isolate ourselves from the dings and dongs and insistent demands of our cell phones, our daily lives.

I will be sharing more of my journey with SeaTrek. For now, here’s to the gems that belong to us all, increasingly hard to appreciate, but forever above us. The gift of wonder, perpetually over our heads. Stills’ song reminds me of when I first saw the Southern Cross on a dark night in New Zealand, many years ago. I never forgot. Nor will I forget how much it felt like home, gazing at the worlds beyond, and knowing that I had a place in a universe so vast, just as we all do. 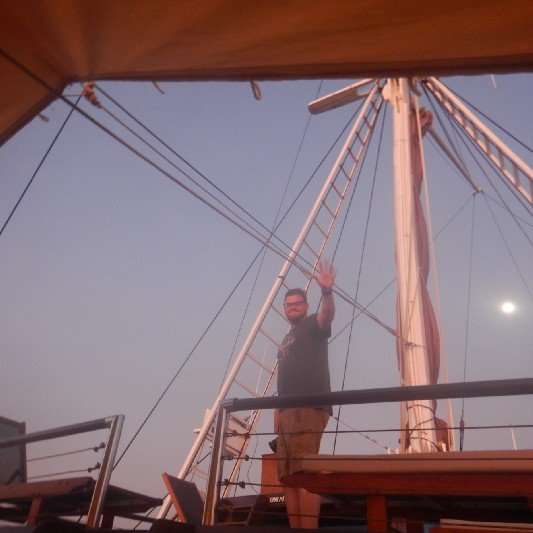 Andy, one of my Montana friends, early am, the moon still high in the sky, on the aft deck.

For more from Julia, check out her website at www.thegallopinggaia.com