Setting A Course For Discovery

Guests on our new Spice Islands to Sulawesi: Sailing the Undiscovered Frontier cruises in 2020 have some very special things to look forward to when they set sail in February and March: things that only SeaTrek can offer.

In September and October this year we took two groups of guests into the heart of the Indonesian jungle in search of two unique, rare and very big insects -- Wallace's Golden Birdwing Butterfly and Wallace's Giant Bee -- two species discovered by the great man Alfred Russel Wallace himself in the 19th Century, and hardly seen by outsiders in the years since. Despite many months of hard work and preparation, including countless phone calls and emails with people on the ground in the Moluccas trying to find the insects' exact locations, when we embarked on our eastern cruises little we did not know if we would have any luck in locating these elusive creatures.

You can imagine how thrilled we were when we found them both!

Rarely seen in its natural habitat (until now), the huge and magnificent Golden Birdwing Butterfly was first described by Alfred Russel Wallace when he caught the first male in 1859 as the "finest butterfly in the world". The photo above is one that we saw in the wild. The photo below is from the Natural History Museum in London and is a specimen that Wallace himself caught. Upon catching his specimen, Wallace wrote: "When I took it out of my net, and opened its gorgeous wings, I was nearer fainting with delight and excitement than I have ever been in my life; my heart beat violently, and the blood rushed to my head, leaving a headache for the rest of the day."

For a man who saw new and exotic animals every day of his time in The Malay Archipelago, the fact that this one took his breath away speaks volumes about its awesome beauty.

Wallace's Giant Bee was a much harder thing to track down, and it required a long trek through the forest to where our local guides knew it might be found. After a couple of hours of walking, the guides stopped and pointed to a termite nest in the branches of a tree. As we watched and waited, a female bee came into view from the forest and flew up to the next and proceeded to go directly inside her burrow in the termite nest, just as Wallace had described. It was a beautiful thing to see and everyone was in awe of having been witness to this rare moment. 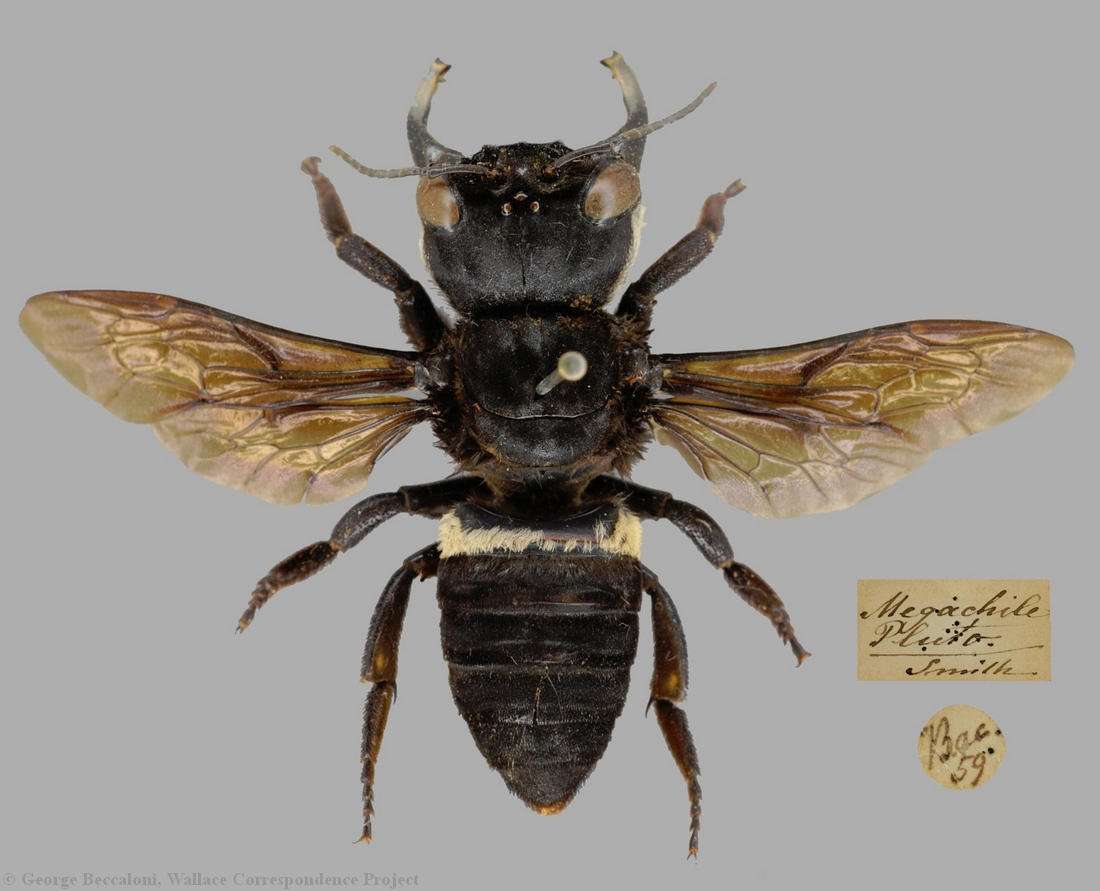 Wallace only ever collected a single specimen of this species (a female – the photo above is his actual bee). Females are the larger sex and measure 39mm in length, with a wingspan of 63mm. Unlike the males, they have huge jaws which they use to collect tree resin and wood fibres. They mix these together and use the paste to line their nest burrows, which they excavate in arboreal termite nests. The mixture hardens and keeps the termites out of the bee's nest. Wallace first discovered the giant bee in the Moluccas in 1849, but not many foreigners since then have ever had the pleasure of seeing it.

Until now, that is.

Very few Westerners have ever seen these species alive in the wild, and we don't believe many travellers have ever been taken to see them before. Our hard work and determination has paid off, and SeaTrek Sailing Adventures are proud and excited to be able to offer this rare and exciting experience to our guests.

To have a chance to encounter these two species, click on one of these links.

If you would like to join us, please send us an email by clicking here.

++ No butterflies or bees were harmed or collected during our visit, and it will always remain so. Photographs and memories are all we take. ++