Adventure & Fun, Life Under Sail, Snorkeling - Life in the Sea

But I Could Never Do That. That’s Right? Until You Try.

The beach was a long, perfect stretch of sugar sand. No rollers, no pounding surf. Gary and Deborah stood in the warm salt water.

“But it’s hardly up to our calves,” Gary said, curious, but still wary.

“Precisely, said Frank. Frank Hyde is a partner of SeaTrek Sailing Adventures based out of Bali, Indonesia. The rest of the guests were swimming out on top of the coral, enjoying the breathtaking view. Frank, a lifetime man of the sea, was in his element. Gary and Deb were frankly terrified of even the idea of snorkeling.

Gary and Deborah weren’t swimmers. In fact, they were happier just being observers. They can’t snorkel, they said. Not us, they said. We can’t put our heads underwater they said. The two were part of a group of guests aboard the two-masted Omak Putih, part of SeaTrek Bali’s fleet of Phinisi Unesco heritage traditional sailing vessels. They were several days’ sailing out of Ambon, one of the Maluku Islands west of New Guinea.

Here, in what is the richest coral reef system in the world, they were surrounded by an unimaginable 1300 species of coral reef fish and 600 species of hard coral, which is 75% of the total for the entire world. http://lcc-abbeytravel.com/leisure/en/article/11-interesting-facts-about-raja-ampat/2098. Yet these two might possibly miss this wonder, just at their fingertips, because of their fears. 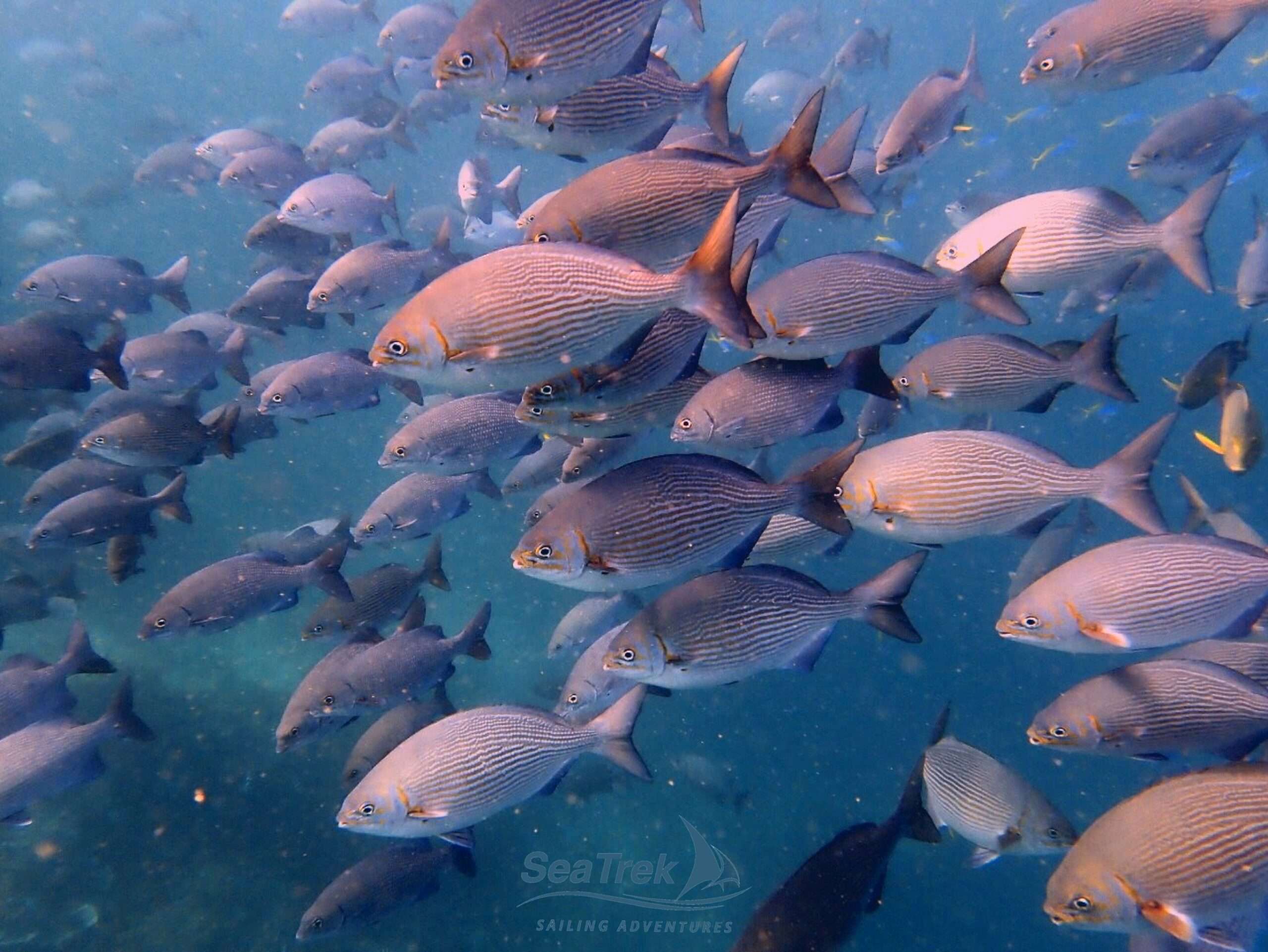 Frank was determined that these two travelers, who had invested considerable time and money to come on this cruise to the distant Raja Ampat Islands of Indonesia, wouldn’t miss out on some of the best corals in the world. Not if he could help it. Indonesia is so much more than just gorgeous islands and beaches. Some of the world’s finest corals are here. Almost 700 species of mollusk. Untold wonders. Not to be missed.

Fear costs people some of the very best gems that life has to offer. These two would miss out on what so few people in the world would ever see, unless he was able to get them comfortable.

“Can’t do that,” they said in unison. Frank smiled. “Just give it try. For just a second,” he coaxed.

Finally, they relented, and tentatively leaned their faces barely an inch into the shallow water, hands placed firmly against the sand, ready to leap back up in an instant.

But they didn’t. Even in water just a few inches deep, the colorful fish of Raja Ampat swim in profusion. Fascinating. Captivating.

Suddenly needing air, they both came up and breathed in deeply.

Frank smiled. “Now, let’s try it with the snorkel.” Carefully he showed them how to breathe and clear their snorkels. Still in the shallow waters where they could easily push themselves up if they got scared, they experimented with breathing while watching the fish.

It took them a while to come back up this time.

Frank invited them to move out to water up to their waists. “Same thing out here,” he said. “All you do is lean over and put your masks barely under the water. At any time you can stand up. At any time we can go back to the ship. Just say the word.”

Again, tentatively, Gary and Deb bent over, placing their faces into the slightly deeper water. They were entranced. Out just a few more feet, the wonders expanded. Exploded.

What on earth was everyone else looking at if it was this amazing in the shallows? What were Deb’s husband and Gary’s sister so entranced by, that they spent so much time with their faces in the water?

Bit by bit Frank walked them through increasingly deeper waters. Both had requested swim noodles, although salt water is famously buoyant. But we need what we need to feel safe.

It wasn’t long before the two had gotten to the point where they were comfortable floating over the reefs, transfixed by the brilliant reef colors and massive schools of rainbow-colored fish.

What had been unimaginable only a few hours before was now…possible.

Many people have a terror of swimming past the reefs where the walls drop away. It feels as though they’re falling, even though they’re buoyant, and going nowhere. Still, the impression is powerful, and causes a great many people to avoid going past the walls where the water descends into a deep royal blue. It’s an understandable feeling, and very common among snorkelers. Deb, as a brand new snorkeler, barely graduated from the safety of the shallows, was one who harbored that fear.

Frank had taken to swimming with Deb, holding her hand on occasion, as she gained confidence. At one point, she spotted a particularly beautiful reef fish. Then began to follow it towards the wall, where the dropoff was considerable.

Frank watched her, concerned. He swam within a reasonable distance, just in case she panicked.

Yet Deb didn’t. On she paddled, intent on her quarry.

At one point, she slowed down, realizing where she was. Frank waited.

Without taking her face out of the water, Deb calmly turned, and finned her way quietly back to the reef.

Once back on board, she was beside herself. Her face was flushed and she was grinning ear to ear.

Did you see me? I wasn’t even scared! I can’t believe I did that!

Gary was just as pleased with himself. He was excitedly talking with his sister and other guests on board the Ombak Putih.

Neither had ever imagined themselves out on the corals, in the wide oceans, paddling happily with everyone else.

Yet they had. And as a result, neither had missed the hidden jewels of Raja Ampat, the great beauty of the coral reefs.

Not only that, both had defeated a terrible fear of the water. A door had opened to another whole world: under the sea.

One of the hallmarks of the SeaTrek experience is the invitation to try. Sometimes the answer is no. Sometimes, maybe. Sometimes, yes. Sometimes, all three, over the course of an extended cruise through paradise. What’s always possible, with the assistance of a well trained crew and a committed staff, is that people who think they can’t do, end up doing.

In such ways, Paradise is found in more ways than one.