With its long, elegant bow, towering twin masts, streamlined wooden hull and seven billowing sails, the traditional Indonesian sailing ship known as a pinisi evokes a bygone era. SeaTrek’s vessels Ombak Putih and Katharina are built in the pinisi style. Built by hand in the traditional manner, they continue the living spirit of majestic sailing ships from the golden age of sail, which ended in the West in the early twentieth century, but thrived until recently in the waters of Indonesia.

Today the name ‘pinisi’ lives on in big, motorised timber traders that carry goods between small harbours across the archipelago. Although they carry only tiny auxiliary sailing rigs, today’s traders are still build by hand using traditional techniques, in many places where the famous, seafaring Bugis people of Indonesia are to be found. The Bugis people originating from the island of Sulawesi, and for centuries they (along with their close neighbours from Sulawesi, the Makassans) have designed and built their own distinctive types of sailing craft to carry cargoes across the shallow seas of the Indonesian archipelago. Following the monsoon winds, they sailed from island to island gathering exotic feathers, sandalwood, spices and gold to sell at a significant profit in distant ports like Singapore. After offloading their wares to eager merchants, they would fill their holds with European and Chinese manufactured goods to bring back to their homeland.

For centuries the Bugis plied these waters journeying as far away as Malacca and Australia in a variety of types of ships. They were not only respected as master seafarers but were sometimes greatly feared as pirates and slavers. They often plagued trading ships of the British East India Company and the Dutch East India Company (the V.O.C.) It is popularly believed these encounters resulted in the European sailors carried their term for these feared “Bugi-men” back to their home countries. Even today, parents around the world may tell their children that if they misbehave, the “bogeyman” will get them.

The Bugis remain best known for their skills as master shipbuilders. Wooden boat-building expertise has been passed down from generation to generation, a knowledge that is further honed through daily practice with the help of each builders’ instincts and natural gifts. Pinisi prove that Bugis tradition and culture have survived current technology and modernity.
With reliable transportation always at hand, the Bugis have migrated far across the archipelago, settling in Java, Kalimantan, Sumatra, Papua, and the Nusa Tenggara islands. The Bugis people have continued to build pinisi on the beaches of their home in Sulawesi, and in their new settlements, provided sufficient wood is available. And so it is that in the small village of Wera on Sumbawa island that the SeaTrek fleet and its passengers are treated to warm hospitality from the “Bugi-men” and an unforgettable encounter with their incredibly crafted pirate-descended ship, the pinisi. 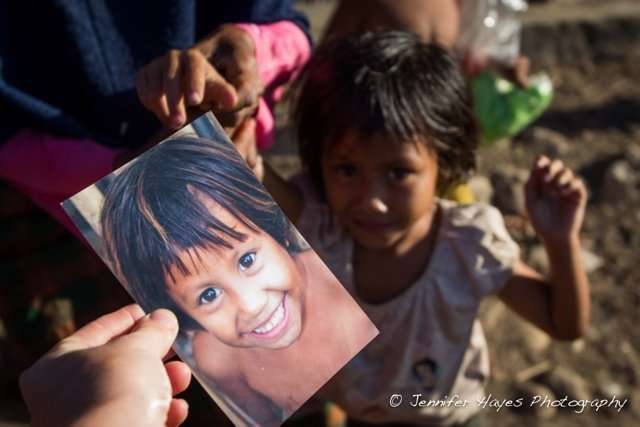 SHIPS OF WAR AND PEACE

A masterpiece of traditional Bugis design, the pinisi are a fascinating mix of ancient and modern. The term pinisi is said to have derived from of the Dutch term for a small sailing craft, pinas (or English pinnace) introduced to the region in earlier centuries by the V.O.C. The 20th-century vessels called pinisi are derived from a variety of smaller craft used for transportation, fishing, and trade. Pinisi were used by the Bugis to smuggle arms and fighters during the Indonesian armed struggle for independence from the Dutch after World War 2.

AT ONE WITH WOODEN GIANTS

Owning beachfront property in Wera village means you might have some usual neighbors. The village homes along the beach are wedged between large timber boats in various stages of construction. Once the craft is finished and put to sea, it’s only a matter of time before the empty stretch of beach left behind is filled with the makings of a new ship.

Without any sketches or calculations, today’s pinisi are built traditionally still using many customary hand tools equipment – although electric drills and chainsaws have somewhat sped up the process. The keel is laid first, then the stem and stern post are erected. However, unlike Western wooden ships where the shape of the hull is built up by attaching wooden planks to a frame or mould, when building a pinisi the planking is assembled before the frame! From the keel upward, the planks are fitted to each other and fastened wooden dowels hammered into hand-drilled holes in the planks’ edges. Plank by plank from the keel to the deck, until the form of the hull emerges. Amazingly, this is all done by eye, without the use of plans or moulds but according to the experience of each master builder. 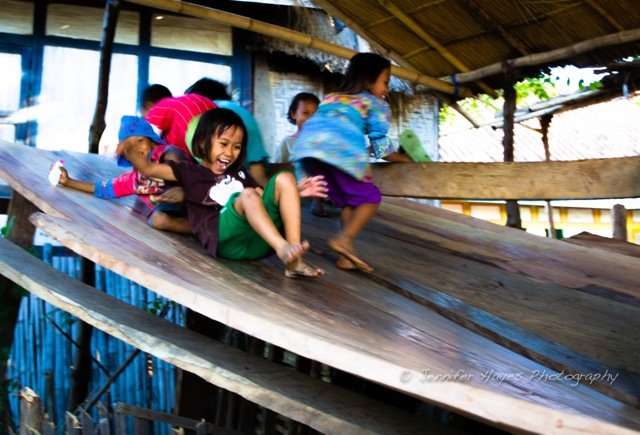 The boat and the sea is indeed a major part of philosophy, behaviour, and everyday life of the Bugis people. This applies to playtime too! These village children know that well laid and smooth wooden planks not only make for a strong hull, but can double as an extra-wide slide. 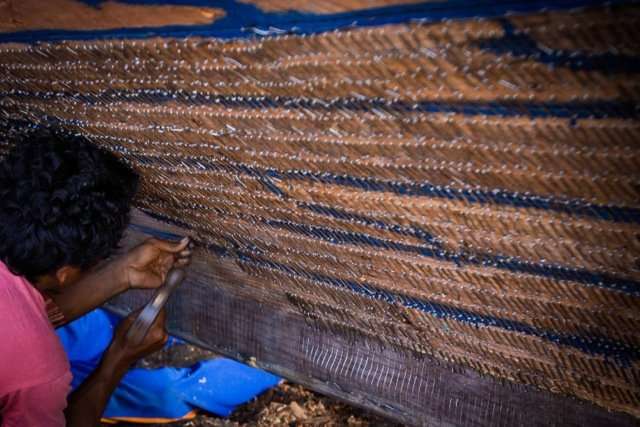 Made of Kayu Ulin or Ironwood (Eusideroxylon zwageri), pinisi are known for being strong, but it pays to be cautious when navigating Indonesia’s notoriously tricky reefs. Up to this point, these boats have been constructed with little metal except for some iron bolts here and there, but on the boat shown here the builders are experimenting with a new technique. Hundreds of kilos of nails will be pounded into the hull to hold a layer of cement to the belly of the boat to protect it from those pesky little scrapes with rocks and reef. 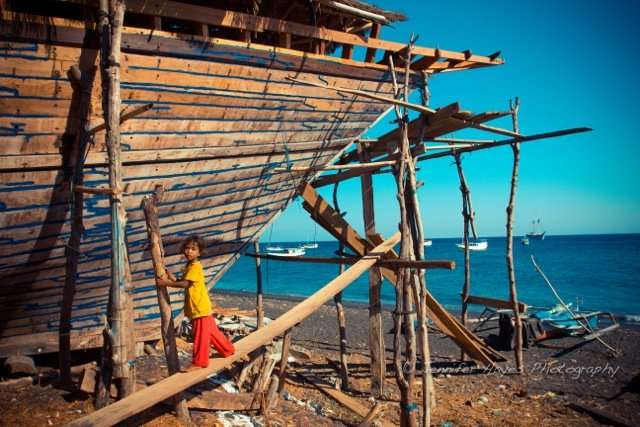 The Bugis pinisi, displacing several hundred tons, still plays a vital role in transport and inter-island trade today. The modern motorised pinisi carry all sorts of cargo from timber to cement, house tiles, rice, sugar, motorbikes and crates of cigarettes to sell these to islanders in the archipelago. Here a local girl plays on a pinisi construction site, while the Ombak Putih, a pinisi still carrying the traditional standing-gaff ketch rig, is moored in the bay. 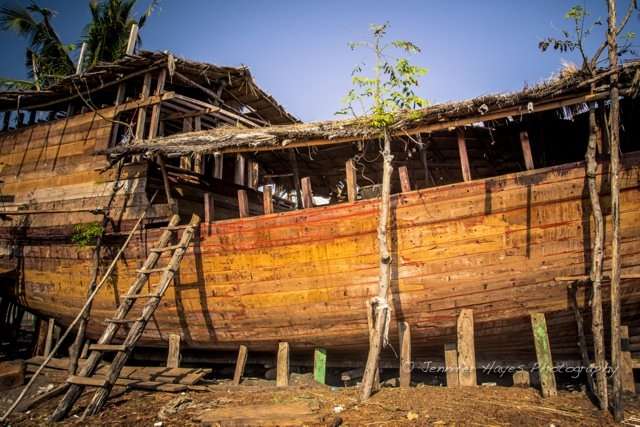 READY TO ROCK AND ROLL

Constructing a basic pinisi for cargo purposes takes anything from a few months to a couple of years before the vessel can be used by the owner. Among other things, this depends on both sufficient timber and the money for wages continuing to arrive on time from the new owner! Although in the past the craft tended to be smaller, it is not uncommon these days to find a 30 to 40-metre vessel under construction. Ombak Putih and Katharina are good examples of the modern Bugis pinisi-style hull shape, adapted to take a powerful diesel engine and carry a generous load. What distinguishes the SeaTrek vessels from other modern wooden working boats in Indonesia today are their tall ketch rigs of seven sails, including two topsails and two tall masts. This is the classic pinisi rig carried through most of the 20th century by the Bugis trading fleet before they began installing engines in 1970s and 1980s.

Congratulations! You have finally finished the long and tedious construction a beautiful pinisi, and now it’s time to set her afloat… but how? As you can imagine, moving a 300-ton goliath takes considerable planning and teamwork from the entire village. Wisely choosing an auspicious day with the highest tides, logs are laid perpendicular to the keel, and with a massive “Hela! Hela!” or “heave–ho!” the village men pull and roll the heavy structure out to sea. If the boat’s trim or weight distribution was established properly on the land, then it should float perfectly once launched into the water. Sighs of relief are followed by celebration as a new pinisi begins its own story at sea. 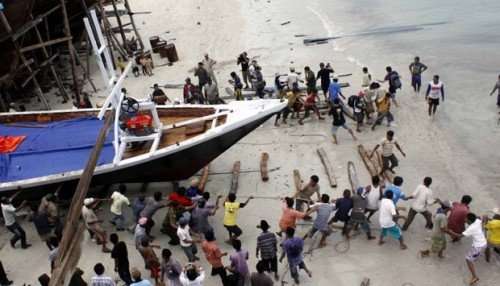 Compared to the effort and organization it takes to move a pinisi into the ocean, pulling a small canoe onto shore for the night seems relatively easy! In the shipbuilders’ kampung, or village, most people are skilled in building not only pinisi, but also various types of smaller wooden canoes, dugouts or outrigger boats used for transportation and fishing. Although Wera is linked by inland roads to major cities like Sumbawa’s eastern capital Bima, it seems the preferred method of travel in this sleepy coastal village is still by sea.

LIVING IN THE RING OF FIRE

Wera village lies on the north-east tip of Sumbawa island, home to the largest and most devastating volcanic eruption ever recorded by mankind. In 1815, Mount Tambora blew its top, blowing 36 cubic km of rock into the air. The disaster decimated the Sumbawan population, but by the middle of the 19th century immigrants from other islands came to Sumbawa to help repopulate the island. As a result, today’s Sumbawa is a mix of different Indonesian ethnic divisions, including Bugis people from Sulawesi. 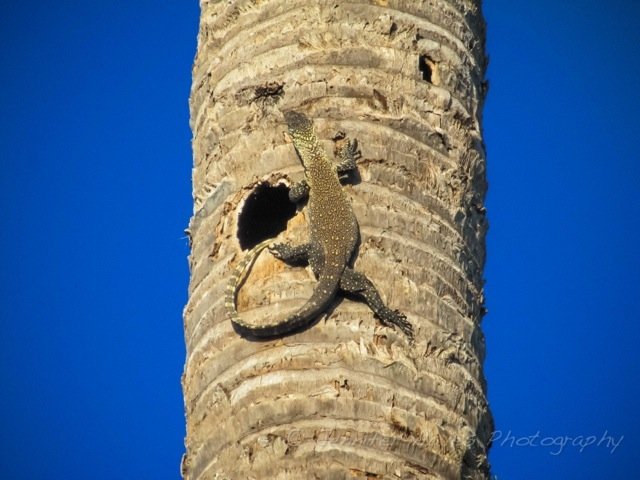 Although ethnically diverse, the vast majority of the Sumbawa population are devout Muslims. Like many of their Sumbawa neighbors, the Bugis converted to Islam from earlier ancestral religions, but still carry out animistic practices and hold special ceremonies to protect themselves from disasters and evil spirits. When building a pinisi, many such rituals and ceremonies celebrate each stage of the construction, such as the all-important laying of the keel and the joining (or “marriage”) of the stem and stern posts to the keel timber. These ceremonies had their origins long before the arrival of the Islamic religion. 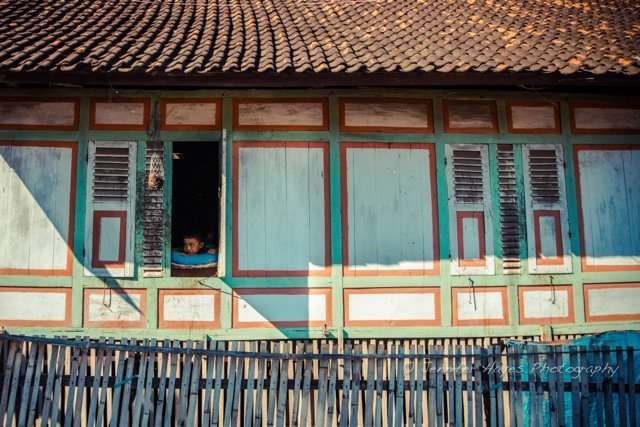 Most homes in Sumbawa are built up off the ground. Building one’s house on stilts serves a variety of functions: natural air conditioning, flood protection, pest control and storage for materials or livestock. In Sumbawa, homes of common people are called bale and homes of the upper class are called bala. Here,a boy meant to be taking his afternoon nap is sneaking a peak of the neighbourhood activities. 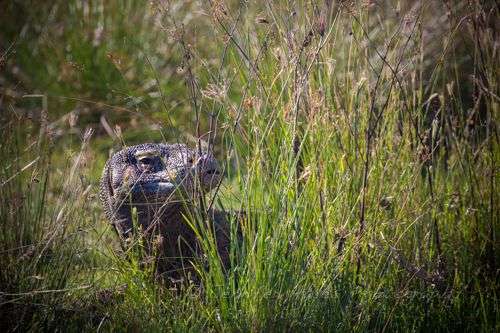 The pinisi is actually a larger version of smaller, traditional Bugis/Makassan boats known variously as pajala, patorani and palari, distinguished not only by smaller size, but often by a single mast and different shaped sails. Some of these smaller boat types still survive and are used for local transport or by fisherman. Here a Wera villager makes repairs to his boat on the black sand beach, while still-active Sangeang volcano looms in the distance.

Another visit to one of my favorite villages on our Bali – Flores trip comes to an end and, as usual, finishes with a group bath! The children of Wera are always excited by a visit from foreigners. Eager to spend every minute possible with their out- of- town guests, many children plunge into the sea to push off our speed boat as we head back to our own Phinisi. 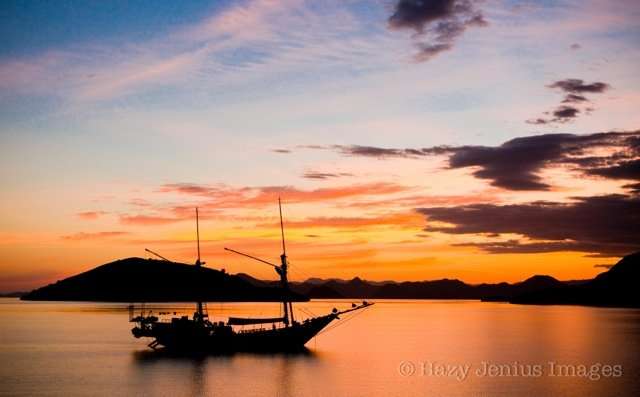 Nowadays the sturdy traditional working vessels of the Bugis have enjoyed a surge in popularity as live-aboard vessels accommodating scuba divers, surfers, and a new generation of explorers. They come fully fitted with en-suite cabins, dining facilities and plenty of deck space for recreation and relaxing while cruising the Indonesian Archipelago. SeaTrek’s fleet of traditional pinisi are not only a part of this living maritime tradition – we are proud to share a deeper insight into the history and the making of these magnificent vessels with our guests.