The Ombak Putih was moored in the bay off the village of Bolango Botubarani near Gorontalo, North Sulawesi.  We’d travelled 12 hours from Bali, changing planes in Surabaya and Makassar, before finally reaching our destination. When we stepped aboard the boat, we were given the good news that there had been a sighting of whale sharks earlier in the day. “Will they come back tomorrow morning?” I wondered out loud. The answer was “Yes, probably” because the local fishermen were feeding them shrimp shells & heads discarded by a nearby shrimp processing factory. 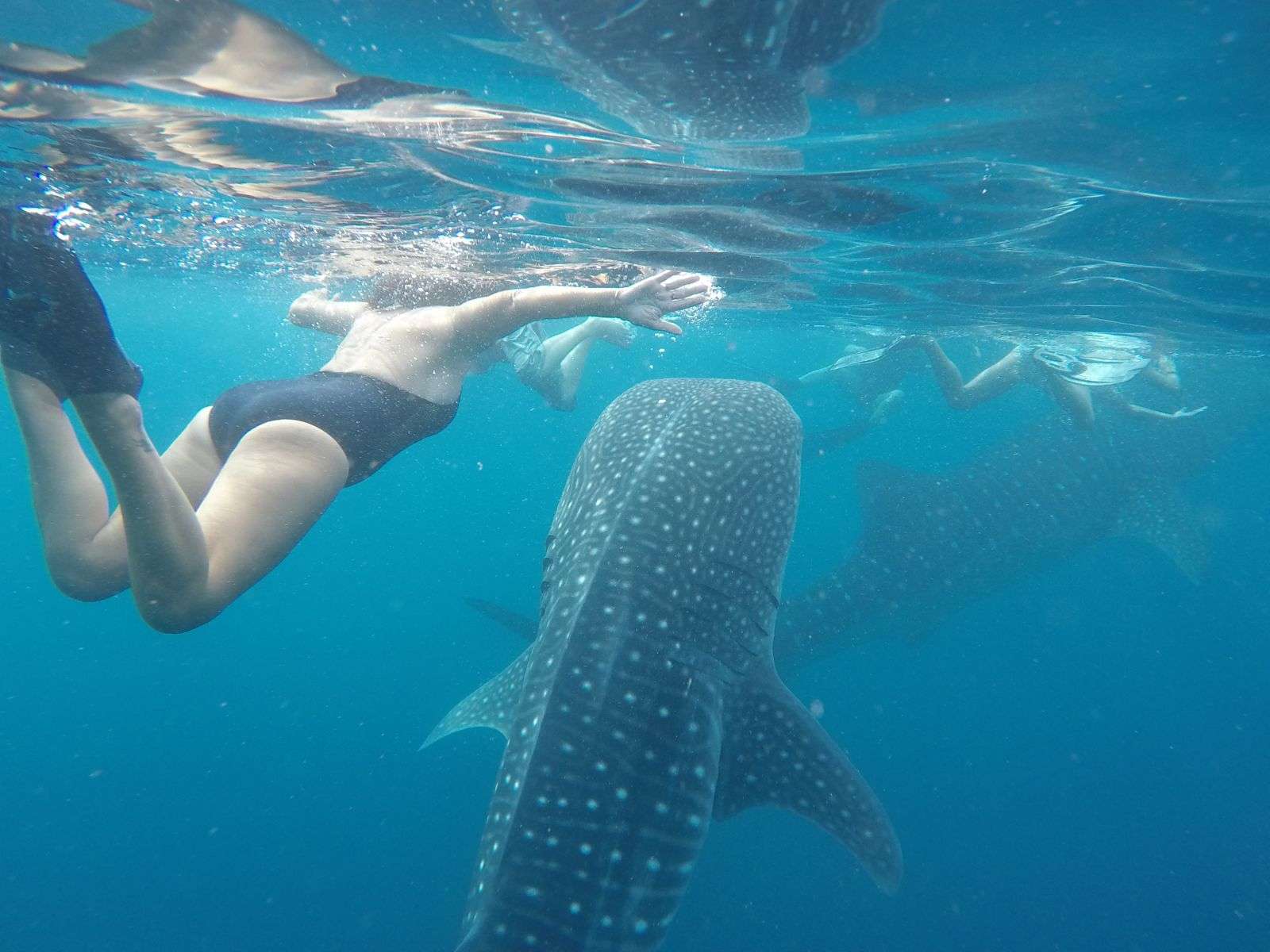 The following day we were up with the sunrise. Our collective sense of anticipation combined with the fear of disappointment was tangible. Word reached us quickly. “There are three whale sharks in the bay”. Without waiting for breakfast, we grabbed our masks & snorkels, boarded the dinghy and headed to the feeding site, just 20 metres from the shore. Scanning the water, we spotted them immediately, close to the surface. Although they can grow up to 12 metres in length and weigh up to 20 metric tonnes, which is about the size of a small bus, these docile giants are filter-feeders, sucking up microscopic plankton and baby fish with their enormous mouths. They only looked like they might swallow us whole! 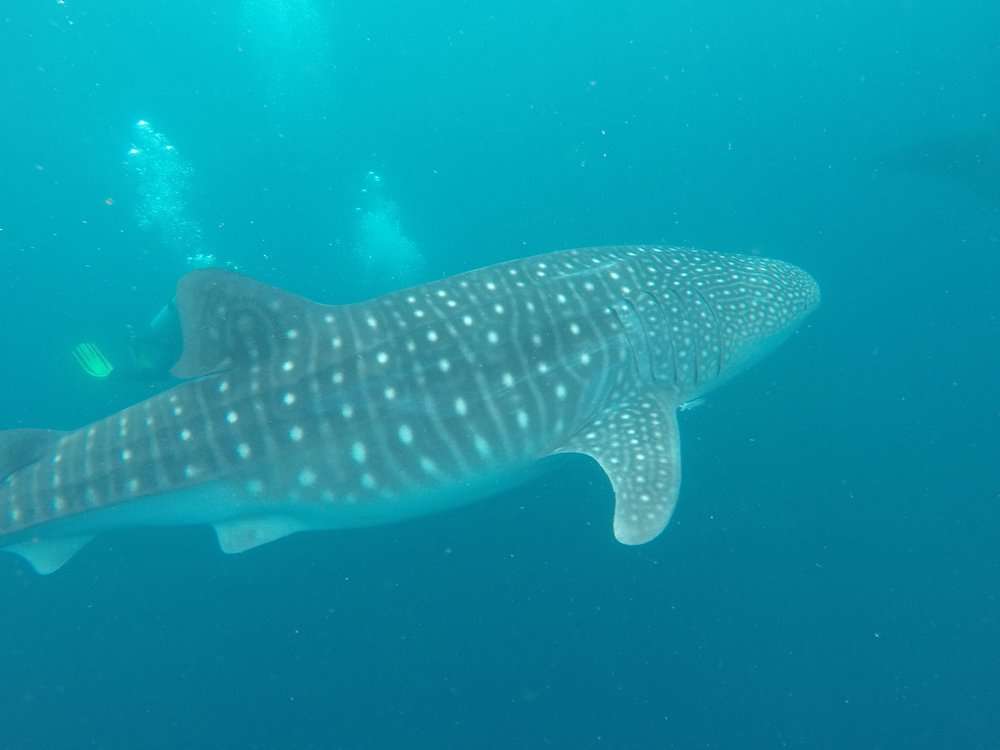 I slid gently into the water, and immediately came face to face with a whale shark, we made eye contact. “Even if they all swim away from us now”, I thought, “I’ve still done it, I’ve had a whale shark encounter”.  They are the biggest fish in the ocean yet they’re not aggressive and they were not afraid of us either, but we’d been told to resist the urge to touch them and to anticipate the movement of their tails. Even though they move smoothly, getting struck by a tail would feel like being slapped by a giant hand. The only real danger would be to swim underneath one. After feeding, they sometimes descend without warning – imagine being trapped under a sinking bus!

I gazed in awe at the creature’s muscular grace. I noted that his elegant, effortless movements were slow but powerful. Five gills on each side of his face were flapping open and shut, expelling excess seawater, while his mouth opened wide to feed. He was adept at maintaining his personal space, but didn’t seem to mind my presence. His thick rubbery grey skin was daubed with pale yellow spots and lines.

Awestruck by the shark’s sheer size and gentle nature, I felt incredibly privileged to have had the opportunity to get up close and personal with such a majestic creature; I was riding on an adrenaline high for days afterwards. Furthermore, it was an exceptionally bonding experience for our group on the Ombak Putih; we had all shared something extraordinary. Smiling, laughing, chattering and swapping photos and stories of our whale shark encounters, we transitioned from being strangers to becoming firm friends on the very first morning of our cruise. 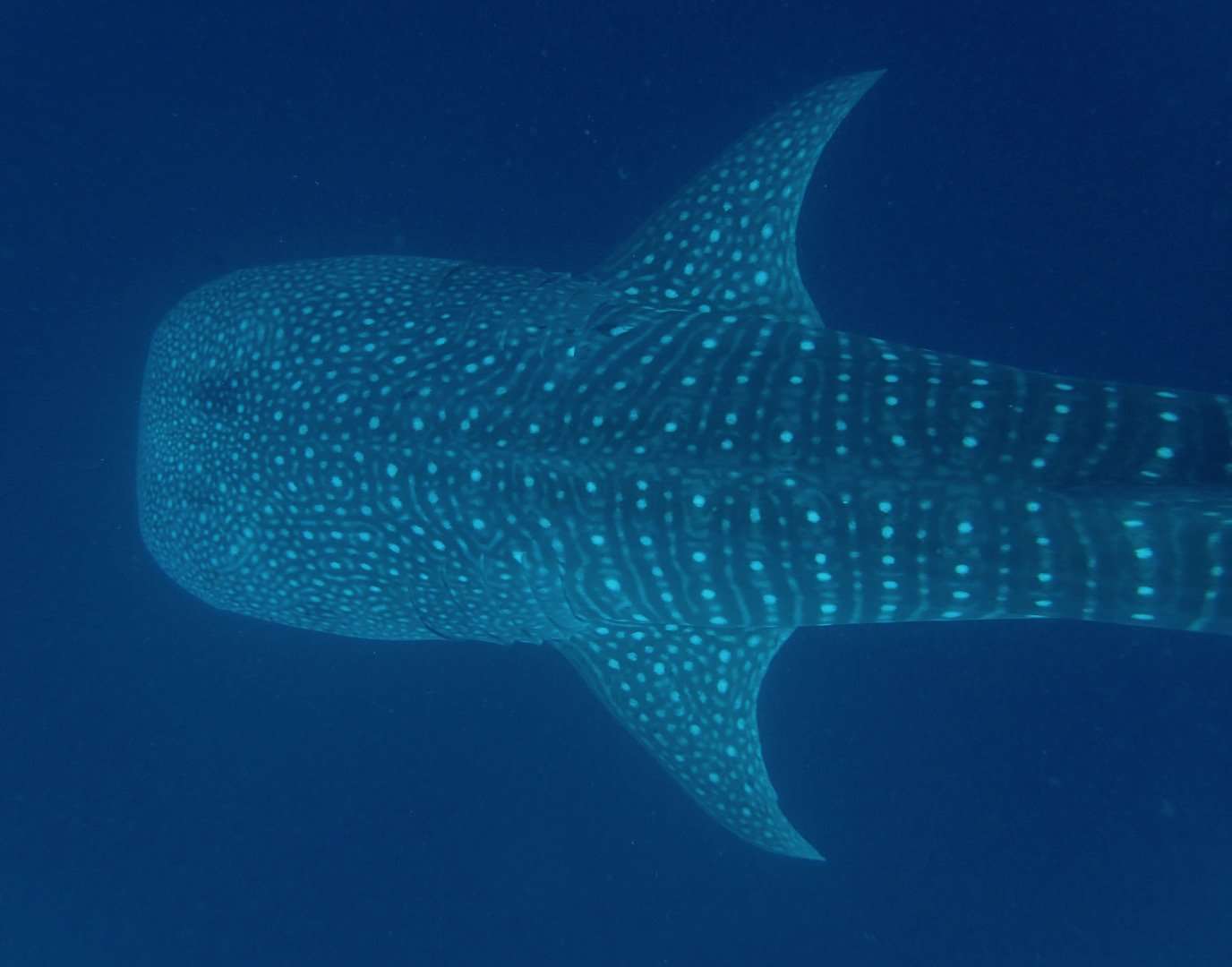 Each whale shark has its own spot pattern, like a fingerprint, which allows scientists to recognise and keep tabs on them. We sent photos of our experience to the Wildbook for Whale Sharks (www.whaleshark.org), which maintains a photo-identification library and visual database of whale shark encounters and of individually catalogued whale sharks. The library is maintained and used by marine biologists to collect and analyse whale shark sighting data to learn more about these amazing creatures.

HOW CAN I SWIM WITH WHALE SHARKS NOW?